We’ve said it before; rather than waiting for someone to come to the door to let you into your audience’s highly metaphorical party, find a window, jump through and act like you’re meant to be there.

Breaking that window (again, metaphorical – we are not endorsing vandalism) is highly achievable for big brands and more local organisations alike. Having watched the rise of influencer marketing and the capability of social media ad campaigning, government and public-sector comms functions have begun to use these approaches themselves.

The result? Great, so great in fact that last year we put together some of our favourite government/influencer collaborations. From inspiring young Australian females to get outside and get active; to remind parents of the dangers of leaving their kids in hot cars, the Australian Government, both federal and state, has well and truly embraced the influencer.

But can you do it on your own; go direct to your audience rather than via a third party (the influencer)?

Though a simple and cost-effective way to get in front of your audience, influencer marketing ultimately requires you to coast off the success of someone else. This can result in a limited amount of time spent within your community, or even worse, as a desperate plea for attention.

As an alternative to the all-powerful influencer, you can do it yourself.

To tackle water safety and reduce drownings, Water Safety New Zealand (WSNZ) did just that. When you discover though that there isn’t an industry to influence how people spend their time in bodies of water, influencer marketing is out. So why not find a way to target the most at-risk group?

WSNZ’s result? @iamtheswimreaper aiming to educate their most vulnerable group – 15 to 30-year-old males.

Designed as a national campaign to bring to life the dangers of swimming with their mascot the ‘Swim Reaper’ (as well as heavy use of pop culture references), WSNZ succeeded in capturing the attention of their audience. 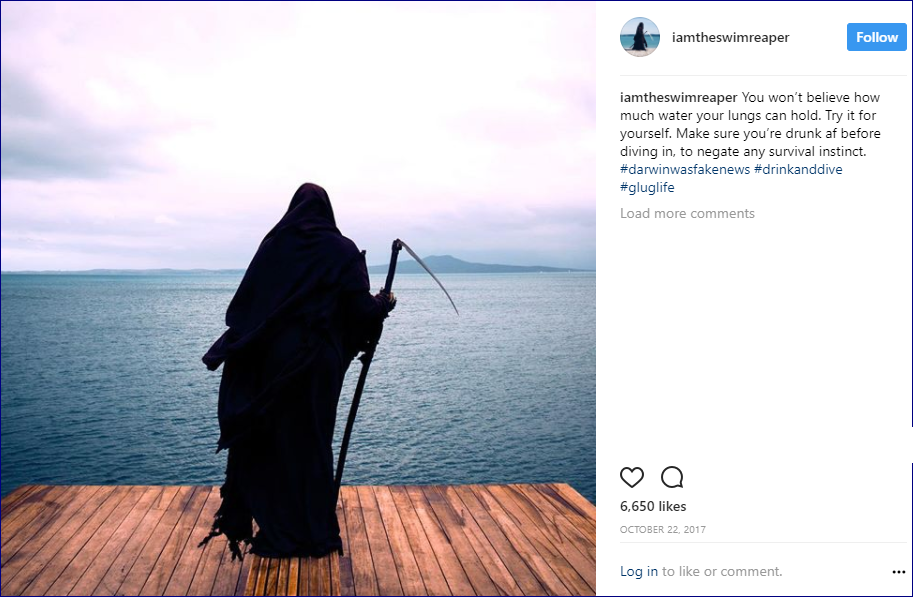 In just three months (October – December 2017) they built their Instagram audience by 100K.

The now internationally acclaimed Instagram account sits at around 187k followers. Though it has been applauded for its use of witty captions to approach a sensitive topic, it wasn’t built overnight.

Building the concept and subsequently, the approach was done in two critical stages:

In examining the statistics of drownings in New Zealand the problem of one in three drownings occurring within the 15 to 30 year old male demographic became acutely obvious The audience was sufficiently narrow across a number of key parameters (gender, age and location) to use insights to build a campaign.

This understanding of the audience was (and always is) key.

For WSNZ though it was more than just finding what they liked and focused more on learning what they actively disliked; what would cause their audience to disengage.

By acknowledging that we live in a time where people are more vocal when they dislike something, WSNZ CEO Jonty Mills noted in an interview with Business Insider that “this audience can react badly to being told what to do – it is a struggle to get positive safety messages through to them.”

This resulted in a campaign focusing on the interests of twenty-something professionals, millennials on their way to university, tradesmen; the broad spectrum of young males in New Zealand.

What do they all have in common? Well, a dark sense of humour, clearly.

Though a very unique approach to a problem, not every country faces, there is a lot that we as marketers can take away from this example.

Most critically perhaps, is that it is possible to go direct to your audience, armed with a deep understanding of their likes, dislikes and behaviours.