Earlier this month, Facebook announced a new brand for its parent company out of nowhere. The new capitalised font and colour-changing logo is being rolled out across Facebook’s portfolio of projects.

Cynics have claimed that this rebrand is a classic attempt to direct attention away from Facebook’s current PR challenges. It’s no secret that it’s been a rough few years for the company (and the social media scene as a whole).  First there was the Cambridge Analytica debacle, where the private data of 87 million people was shared with researchers without their consent.

Then, the United Nations described Facebook as a “useful platform for those seeking to spread hate” when exploring its role in generating support for state-led violence against the Rohingya people in Myanmar.

As recently as this October, Facebook sparked new rounds of controversy with its announcement that it will not stop politicians from promoting fake news in their advertising.

While the rebrand appears to be a fairly simple change to the font and spacing of the old parent company brand, there may be more to it according to company insiders.

The new brand is being placed across products across Facebook’s portfolio of apps and services. This may be designed to placate the Federal Trade Commission (FTC), which slapped the tech giant with a $5 billion USD fine for privacy violations last month. 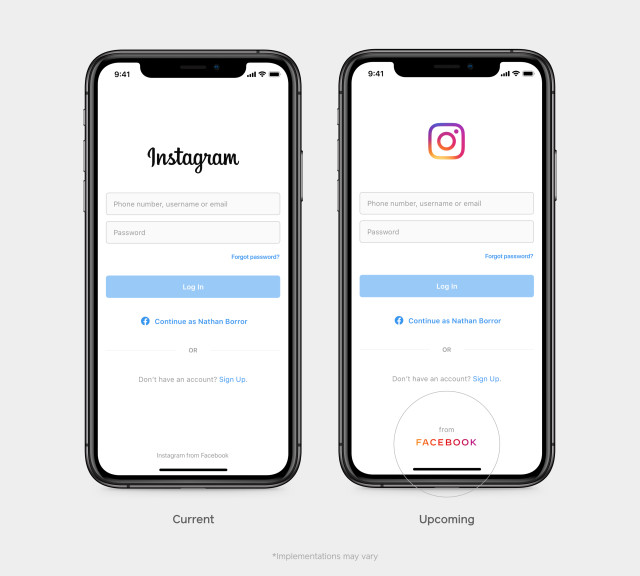 More explicit acknowledgements of Facebook’s ownership of apps are being rolled out.

As the FTC is reviewing its recommendations, sources inside the firm say the rebrand is a move to show its ownership of apps such as WhatsApp and Instagram more clearly.  In a recent Pew survey, 70% of people weren’t aware that Facebook owns both WhatsApp and Instagram. This is an issue as people become more aware of the amount of data Facebook harvests, and look for other options.

The FTC alleged Facebook “repeatedly used deceptive disclosures”, and this has been acknowledged in passing by Facebook’s CEO Mark Zuckerberg. “Many people don’t know we build these products or that our teams often work together,” he said in a recent post. “But we believe people should, because it’s important for people to know who’s behind the products they use.”

These changes are a welcome sign that Facebook is responding to pressure from policy makers. Regulators across the globe are anticipating the full FTC report and its recommendations will be released in the coming months.

As Australia continues to explore expanding social media regulation, the FTC report is likely to trigger further amendments to Facebook and other networks which will need regulators’ attention.

As social platforms change the features they offer, it’s also worth ensuring government communication teams are abreast of the latest services offered on each platform. Twitter has recently announced it will reject political advertising altogether, relying on organic reach to drive exposure to political content.

While Facebook is still the most popular platform in Australia, Twitter’s user base is not to be ignored. When preparing for 2020 election campaigns, communication teams that find utility in Twitter marketing will need to double down on building their organic following through paid campaigns now, identify top-performing post times and influencers, and trial different tactics to try to replace the benefits of paid reach. Communication strategists may also like to explore new advertising channels to capture some of the same user base.

Finally, it’s worth noting that Facebook now stores all political ads for seven years in a publicly available database. When considering how messaging will resonate with the public, it is noteworthy that candidates can easily access each other’s sample ad messaging and graphics. This may bring a new level of scrutiny to campaign content, which is worth bearing in mind during final review checks.

Emma Gray is the contentgroup office's resident Kiwi-that-sounds-like-a-Brit. A Communication Strategist fascinated by the digital world, misinformation, and Gen Z trends on Tik Tok (scrunchies, anyone?)