In the past, the idea of government professionals drawing inspiration from pop culture or using humour to create cut-through communication would have been unheard of, if not downright ridiculous. But that was before the rise of digital media and the new, existing age emerged where smartphone wielding storytellers have the power to determine what and when content gets published.

The tech world is evolving, as are people’s expectations about the type of content they consume. Our digital spaces are becoming increasingly crowded, noisy platforms; ones where it’s becoming more and more difficult to be heard. As communication professionals we must move with the times by evolving tried and trusted approaches to content creation. We must do this, or face getting left behind – drowned out by competitor messaging and those about Keeping Up with the Kardashians.

For government communicators, this means loosening the reins on corporate language. It means using narratives and strategy, but breathing life into old and outdated tactics, or emotionally devoid tones. Call in the creatives, it’s time to shake things up!

For inspiration, look to Tourism Australia and their quirky, yet acclaimed 2018 US Super Bowl ‘Dundee’ campaign. The star-studded 60-second ad promoting a fictious sequel to the 1980’s hit, Crocodile Dundee, achieved a social media reach of 412 million, and 68.8 million video views – all within 48 hours of its release! Epic. 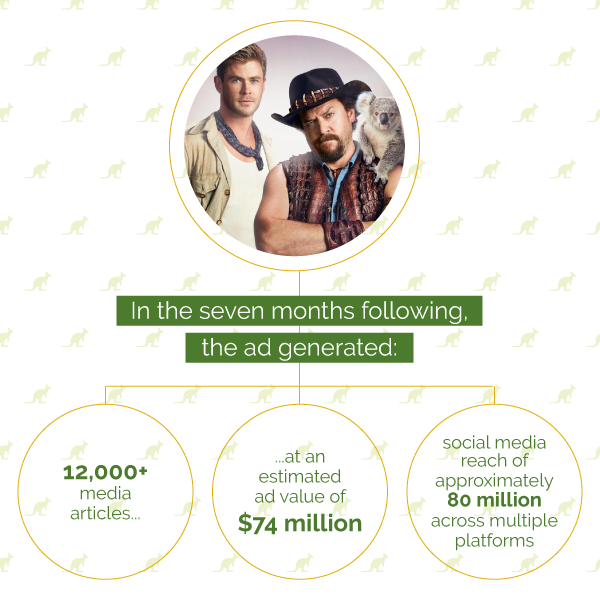 In the seven months following, the ad generated more than 12,000 media articles (at an estimated advertising value of $74 million), and social media reach of approximately 890 million across multiple platforms. Picking up a bunch of awards at the 2018 Cannes Lions International Festival of Creativity, the campaign reinforced the all-round Aussie stereotype of riding kangaroos and wresting crocodiles.

And there lies the secret to its success; owning the stereotype that people know, love and associate with Australians. But behind every campaign is the need to tie it back to the broader business strategy. For Tourism Australia, this was to boost Australia’s tourism industry by converting awareness into action.

According to Tourism Australia’s Managing Director John O’Sullivan, the campaign was a ‘bold decision’, based on a ‘calculated risk’ and desire to explore a ‘more deliberate move towards more impactful marketing programs…’. Amen to that!

Queensland Police are also throwing the book at more traditional approaches to government communication. Their funny, pop culture-laden Twitter and Facebook posts have achieved cult-like status around the world, with Facebook attracting a whopping 925,916 ‘likes’ and Twitter, 190,000 followers. Like the folks at Tourism Australia, these posts are strategically inspired, this time by the desire to reach as many people as they can in the community with alerts, warnings or calls for help. Genius!

While the success of Tourism Australia’s campaign demonstrates what can be achieved when there’s cash to splash, the popularity of Queensland Police’s low budget social bangers and associated platforms prove that when it comes to winning the hearts and minds of the community, there’s more to it than money.

In previous posts, we’ve talked about a growing shift in government communication – one that advocates powerful storytelling as a new way for reaching desired audiences. Stories with purpose, that are vivid, easy to read, understand, emotive and relatable. Above all, powerful stories should involve us, move us and in doing so, compel us to act.

For Tourism Australia and Queensland Police, they’ve mastered the art of telling powerful stories and converting awareness to action.

For government communicators – if not any communicator, we urge you: take a leaf (if not a few sheets) out of the emotive, storytelling encyclopedia that Tourism Australia and Queensland Police reference. Go forward and be bold, creative, calculated with risk and confident that with a little courage, you can achieve cut-through communication.