It’s no secret that here at contentgroup, we can tend to get a bit fan-groupie when talking about UK government communications.

Leading the charge of putting citizens and users at the heart of the way the UK government communicates is a good friend to contentgroup and Executive Director of Government Communications, Alex Aiken.

We’re such a fan of Alex that we’ve had him on our podcast not once, but twice.

Following a set of steps Alex shared with David on our InTransition podcast (now rebranded as GovComms Podcast), we’ve looked at how the UK government is fulfilling consumer need for a one-stop-shop to connect citizens with the government.

By following Alex’s five steps below, we get an idea of both the size of the task facing government communicators as well as how we can approach communication so that the result is stronger and more valuable.

The first step is an important one that can get overlooked in the public sector: understand the political climate and know the political process.

How does our audience feel toward the government? Is the current political climate relatively positive or hostile? Is the government trusted? What is particularly sensitive?

Of course, the public service is apolitical, but as Alex notes the role of communicators in government is to “promote, explain, and justify the policies of the elected government.”

Communication doesn’t exist in a vacuum, unaffected by the broader context. The political context, in fact, forms the basis of any valuable communication approach.

In sport, it’s crucial to develop a game plan with a clear outcome and a means to achieve it. As communicators, we’re in the same game: planning what we want to happen, where it will happen and how to get there.

In short, you need an idea, something simple to aim towards and then a way to achieve it.

By creating a pathway to follow, it’s easier for little ideas to grow into something much larger.

And the way the UK government does this? The OASIS model. 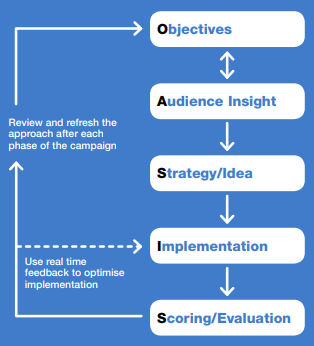 Providing a pathway to map objectives, audience insights, strategy/idea, implementation and scoring/evaluation, OASIS provides UK government communicators with a living framework in which an idea and approach can grow.

So what is it that makes OASIS a Wonderwall, I mean wonderFUL framework? Rather than being a means to an end, OASIS is constantly taking learnings, applying them, reviewing the approach, and taking those learnings on to the next level.

Within the Government Digital Service (GDS) in the UK government is a system that revolves around an end-to-end cycle, constantly evaluating how they can build on and adapt their approach for the next stage.

Crucial to seeing your framework flourish is teamwork and collaboration. As we learnt from the debate of generalisation vs specialisation, building a team packed with a variety of skills is more beneficial than a team specialising in one single area.

The video below looks at how the GDS content design team functions. Rather than delegating tasks, they function through collaboration with one another, letting them focus on high-quality content. Not only this, by working together they work towards a better understanding of their audience.

Like the role the OASIS model plays in creating and executing ideas, it also plays a crucial role in determining what does and doesn’t work, as well as where to go next.

Crucial to any task, not just a communications activity, is looking at your results and evaluating what worked and what didn’t. This is built into the OASIS model, and with analytic functions inbuilt to nearly all communication platforms now, it’s easier than ever.

Not only are you now capable of going direct to analytics and studying real-time results yourself, you can also track content live and iterate and adjust as necessary.

Now, here’s a fun one. Once the approach has been completed, you have permission to give yourself a pat on the back and celebrate your successes (you’re welcome).

Watch how the GDS work towards celebrating their accomplishments in this video by the Guardian.

Have you used any of Alex’s tips in your work? What was your favourite step? Let us know in the comments section below.