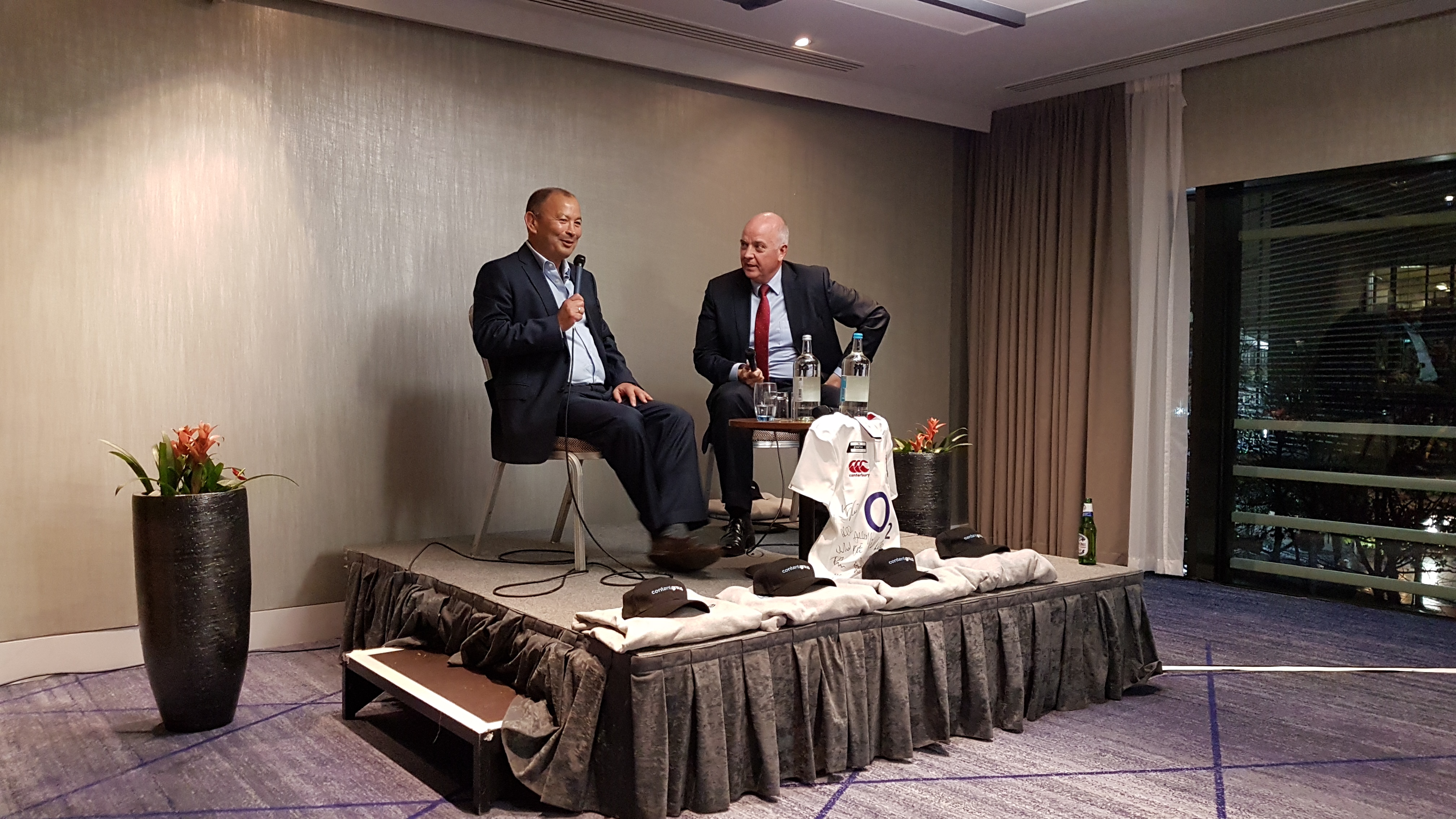 In a little over three weeks, England rugby coach and contentgroup ambassador Eddie Jones will be in Canberra to raise funds for the ACT Rural Fire Service.

Along with former Brumby and Wallaby players Rod Kafer, George Gregan and Stirling Mortlock, Jones will discuss not only his career but the secrets of building and sustaining high-performing teams.

To mark his appointment as an ambassador for contentgroup, we held a similar event in London in November 2017.

On that occasion, Rugby writer James Stafford was among the crowd.

Here is his report.

Few people in the sporting world can speak with such authority on building and sustaining an elite team like England head rugby coach – and contentgroup ambassador – Eddie Jones.

The Australian-born Jones has one of the most impressive CVs in professional rugby history – breaking records and winning silverware over the past two decades with a wide range of teams including Australia, Japan, South Africa, England and the ACT Brumbies.

To mark his recent appointment as ambassador for contentgroup, Eddie Jones took time out to speak with David Pembroke, CEO of contentgroup, on elite performance. The talk was held in front of a select audience in London made up of an impressive mix of senior business leaders, diplomats, professional sports administrators and communication experts.

Culture at heart of leadership

A key theme of the evening’s conversation was the critical role culture plays in building elite teams and how leaders must identify and implement a culture specific to the team they head up.

“When you are operating in different cultures, one of the most important things you have to have is discernment,” said Jones. “You have to understand what’s important in that culture and not break those values. I’ve been lucky enough to coach a number of international teams, and each time the first thing I looked at was the culture of the country and tried to work out what is it that was important for that society.

“With Japan I got someone to do a study on the Samurai tradition. What came out of that thesis was hard work, loyalty and trust were the three most important values. So we created the whole team around that. They were the three values we focused on.

“Coming to England was a little different again, taking over a team that hadn’t been in a good state. You try to immediately work out those players that want to do something a little different, who are prepared to be brave. One of the things I found in England was that people want to be polite, it’s an important part of society. English players don’t like to be told off in front of others and management staff don’t like to have robust discussions in front of each other. So you have to find other ways to do it and I wanted to make sure that was part of how we operate.”

It’s not about wanting to succeed, it’s about knowing how you plan to succeed

Public displays of confidence haven’t always sat comfortably with British sporting teams. Jones, however, has not only openly stated his desire to win a World Cup with England, but also his belief that there is no reason at all England can’t be the best in the world.

Far from being chest-thumping bravado, Jones argues making such a claim serves a valuable strategic purpose.

“Every day I see England players believe a bit more. At first they didn’t and winning the Six Nations was enough. Now it is not. Now the desire is there to work that much harder and we continually challenge the players to get there.”

Leading through respect, not fear

A popular topic in the Q&A session that closed the evening was how Jones faced the eternal and universal leadership dilemma of whether to lead through respect, fondness or fear.

“Twenty years ago, you could coach by fear,” admitted Jones. “That doesn’t work any more, guys get demotivated by it. Young people have changed a lot. They live a lot of their life on mobile phones, but we can’t text the players in a scrum during a game so we have to find other ways to communicate with them. It’s hard.

“As a leader it’s about respect, you can’t afford to be liked. You can’t afford to have strong personal relationships. Today I had to tell seven players they won’t be with us any more and it never gets any easier. I never sleep the night before.

“Respect means so much. How do you get it? Respect is doing what you say you will do and making sure your staff do what they say they will do. Our whole organisation is based on trust and from trust you get respect.”

Staying true to your values

One of the most telling insights of the night was Jones explaining why being a popular leader isn’t always what a team needs. In his first major coaching role at the ACT Brumbies in Australia in the 1990s, Jones admitted to feeling “out of his depth” as his side endured a torrid season.

“When I went to the Brumbies I was astounded by the lack of professionalism,” admits Jones. “But I went along with a lot of things and didn’t change too much. At the end of the season we did a questionnaire with the players and despite coming tenth the players said I was a good coach.

“The following season I changed a lot of things, did what I thought was right for the team and we played the most outstanding rugby and came fifth. When we did the same survey, this time the players said I was a crap coach.”

Jones said the experience made him realise the importance of self-belief in leadership and of following the values that are intrinsically important to you. Being popular isn’t essential to making a team reach its potential.

With Jones’ track record in rugby and his unprecedented impact on the English national side over the past two years, few in the room had any doubt Eddie is more than capable of taking his side to the very pinnacle.

Come to hear England rugby union coach Eddie Jones in Canberra on Thursday March 26, when he headlines a bushfire fundraising event: ‘An evening with Eddie Jones and friends’ will raise funds for the Rural Fire Service in the Australian Capital Territory. Eddie will be joined by former Brumby and Wallaby players George Gregan, Rod Kafer, Stirling Mortlock, Brett Robinson, Marco Caputo and Justin Harrison. Guests will be treated to a three-course meal, a selection of premium beers, wine and soft drinks, and music from the Australian Army Band and Australian Voice Collective. Purchase your tickets here to be part of this memorable evening.