“Harnessing the power of digital technology is not an option for the Australian Government. It’s the future of it.” (Scott Morrison, PM: Institute of Public Administration speech, 19 August 2019).

Whether you are receiving work related emails on your mobile phone, scrolling through social media, or watching the TV, your exposure to new information is relentless. It will come as no surprise to you that more people are using digital technology than ever before. Hootsuite reported that 72% of Australians are active on social media and that there are 30% more mobile phones than there are people. In another report, they stated that social media is increasingly a strategic priority for national governments. It continues to be a vital way for government departments to communicate with citizens.
So, how can you harness the power of technology to benefit your organisation?

In the era of ‘Fake News’ and cyber security faux-pas, social media has increasingly become a space for mistrust and confusion to flourish. Citizens are placing less trust in their government – an OECD report stated that only 43% of citizens trust their government.

With this bleak image in mind, you could be forgiven for thinking ‘I don’t believe social media can help instil trust in the wider community’. But you’d be wrong to think this, and here’s why.

Social media, whether through Twitter, Facebook, Instagram, LinkedIn or other channels, offers a unique opportunity to connect with citizens in multifaceted ways. The OECD report goes on to explore how governments can win back trust: through reliability, responsiveness, openness and inclusive policy building. Social media presents an opportunity for organisations to disseminate content, and encourages inclusivity through interaction with, and participation of, users.

In his address to the Public Service last month, Scott Morrison emphasised how the government “needs to connect instantaneously and seamlessly with Australians to answer questions, provide services… solve problems.”

And what better way to engage with the public than by openly sharing information with them, in real time, and seeking their thoughts to bolster inclusivity and interaction?

By using social media, you can be more transparent. In a climate of disinformation, use your platform to share real information. Connect with your audience. Be authentic and honest. It builds trust. And ultimately, that keeps your audience engaged.

2. Evolve with the times

At the heart of Scott Morrison’s address to the Public Service, he emphasised the need for the APS to evolve to meet the needs of the population. He said, “when [Australians] engage with the public service they don’t feel like they’re going back in time.”

So how can you evolve with the times to meet the needs of your citizens?

Behaviour patterns go hand in hand with the evolution of content communication. Government organisations must really understand the transformation of how people receive content to effectively engage with the people who matter the most.

Live video and imagery are fast becoming the most popular, effective methods of social media interaction. With the rise of social media ‘Stories’, content can be shared in real time, and this style of engagement is something businesses continue to benefit from. Politicians, royalty, and celebrities from A to Z list are taking advantage of this content dissemination.

In his speech, Scott Morrison expressed his wish for “interactions with government to be simpler, more human, and less bureaucratic”.

Does our PM practice what he preaches? Let’s looks at his Instagram page. His stories cover everything from the Pacific Family to his own family, showing him in the role of PM and father. Now we aren’t suggesting that government organisations post photos of their families, but this ‘human’ element of social media can really drive citizen engagement.

Another great example – take the NSW Police Instagram page. They have over 178,000 followers and their visual content encompasses everything from driving safety advice to new police puppies. 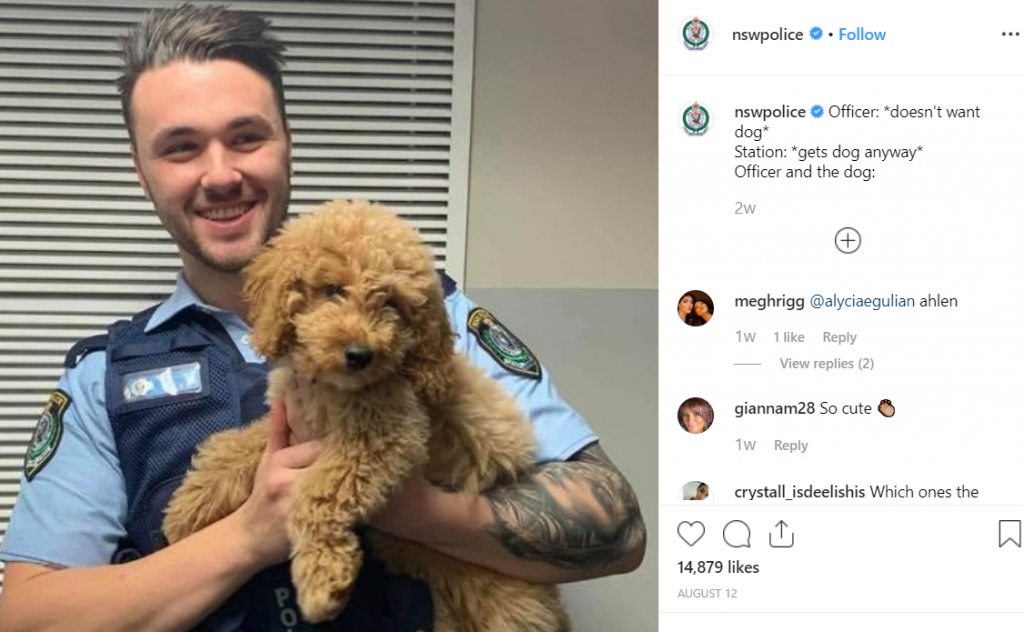 They engage with their audience using tongue-in-cheek humour to convey light-hearted and serious content. This creates the perfect balance to inform and engage citizens.

The result? A real ‘human’ connection between the NSW Force and their citizens, heightened engagement, and transparency. And this is what all government departments should be aiming for.